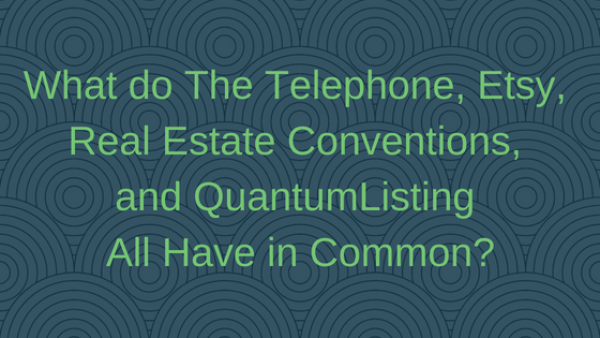 What Do the Telephone, Etsy, Real Estate Conventions, and QuantumListing All Have in Common? 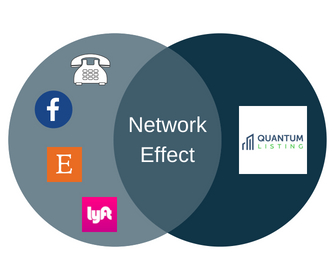 In all these scenarios, the user is interacting with content generated by someone else on an online platform. Interaction between users is key to the business model of Facebook, Etsy, QuantumListing, and many more online platforms.

The number of users on these platforms and the amount of content that they generate are what give them value. The more people use the product, the greater value the product accumulates. Then as the product gains more users, an even greater number of people start using the product because of its greater usefulness.

This phenomenon is called the network effect.

Networks have always been around, but the internet has amplified the importance of networks and the power of the network effect.

Social media provides the most widely-known examples of the power of network effects.

Take Facebook for example. The more people there are on Facebook posting cute photos of their children, angry political rants, and everything in between, the more useful Facebook is for its users. The more connections on the network, the more useful it becomes.

Facebook wouldn’t be worth anything to anyone if no one was posting or looking at content, regardless of how much money was poured into its web design. However, because over two billion people are on Facebook and using it regularly, the company is worth over half a trillion dollars.

The most important thing for creating a network effect is that a network achieves a critical mass. Networks need a certain “critical mass” of people that join to begin the cycle of greater usefulness and more users that make network effects so powerful.

How do network effects relate to commercial real estate?

Network effects have been relevant to the commercial real estate industry since before the internet era.The network effect is the reason that real estate conferences are useful. Conferences bring people in the industry together to network. The more people at a conference, the more useful the conference is because of the more connections you can make there.

When QuantumListing hosted the #LetsGetSmart speaker series at the ICSC RECon in May, it was a successful event because not only did it have insightful speakers, but also because there were lots of people watching the speakers and talking to each other about the presentations afterwards.

To use a digital analogy, the #LetsGetSmart speakers were like YouTubers, the conference was like the site YouTube itself, and the audience members were like commenters on the site. (If anything in that sentence confused you, ask your kids and they can explain.)

QuantumListing is more similar to platforms such as AirBnb and Lyft than some other digital platforms because the totality of the transaction does not occur online. Significant parts of any deal that come from QuantumListing still happen in the real world. Viewing a listing on QuantumListing serves as a jumping off point for the deal.

Since real world interaction is still vital to the real estate industry, the fast-growing network of all QuantumListing can be a bit intimidating with all of its listings.

Sometimes within the greater ecosystem of a digital platform, users want to have oases of smaller communities without all the distractions that the whole network can bring. Facebook groups are an example of this type of insulated subdivision within a network.

These smaller groups can select information from the network as a whole to suit the group’s more specific purpose.

To leverage the network effect for specific groups, QuantumListing has launched a new Networks feature. QuantumListing Networks join members with similar interests together, providing them with the listing information and business connections that are most relevant to them.  With just a couple of clicks, you can see the listings in your network, network members' Profiles, and changes within your network. Thus, when your Network grows, it will be more useful to its members because it will have more information and more connections, which in turn will attract more members with their listings.

In the coming days, we will be posting more content about QuantumListing Networks and how you can use them to take advantage of network effects.