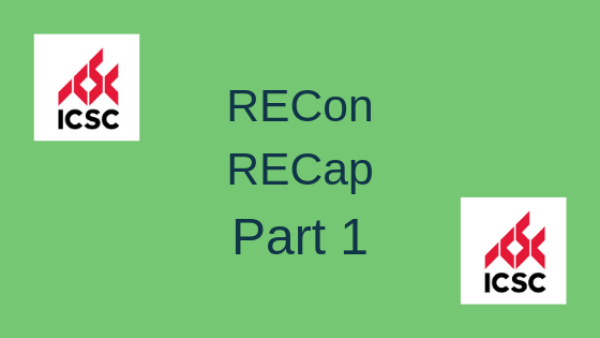 Last week, we held a RECon RECap webinar, reviewing our time spent at ICSC RECon in Las Vegas last month. We would love for you to check out the replay of the webinar, but will also give you the run down here and in our next post.

To start, we hosted three events during our time at ICSC - #LetsGetSocial, #LetsGetTogether, and #LetsGetSmart. The first event, #LetsGetSocial, was a great welcoming event to get together with old and new faces. We are so appreciative of our super hosts Jeff Finn of Realnex, Dan Palmeri and Natalie Wainwright of VegasCRETeam, Beth Azor of Azor Advisories, and Danielle Watson of DealPoint Merrill for graphics. And we’d like to give a special thank you to our other co-hosts: Buildout,  Julie Augustyn, Michael Lin, The Content Funnel, CREtech, The News Funnel, Sarah Malcolm, and Linda Day Harrison of theBrokerList. Several of us stayed for #LetsGetPizza afterwards, which was a smaller yet enjoyable event.

Be sure to check out Melissa Swader’s video recapping #LetsGetSmart here! Also, great pictures can be found here. We have hosted this event for four years now, and look forward to hosting it again next year. If you plan on attending ICSC in 2020, get in touch with us!

We loved joining forces with theBrokerList, The Content Funnel, The News Funnel, DealPoint Merrill, StackSource, and Perlmutter Properties in our booth. It was a productive two days of meetings, podcasts, and we even had a poll asking whether people are optimistic about the future of the shopping center. After tallying the votes, there was an overwhelming majority who are optimistic, which is great! Do you agree? Disagree? Share your thoughts in the comments below! All in all, it was so great seeing familiar faces and meeting new people. It was also awesome learning about some new and exciting companies like Mavatar, Atypical, and Spatial AI, to name a few.

If you have been to ICSC before, you know what the experience is like walking through the North, South, and Central Halls. For those that have not yet attended ICSC, check out Mike Lin’s recap videos on Twitter. And stay tuned to our blog to hear the perspectives of an ICSC rookie versus an ICSC veteran.

The second to last day of the convention concluded with a raffle of a Tesla plus $25,000. The first three contestants drawn were not in attendance, and are still kicking themselves because they could not get to the Tesla within 60 seconds of being called. They are still Tesla-less. When the fourth contestant was called, the instant shriek confirmed that she was in attendance and thousands watched as she claimed her prize.

Team members of QuantumListing and Perlmutter Properties had a great time at several networking events and parties such as the Welco Realty party, and particularly the New York Developers’ Party at the Bellagio. We did not, however, attend the Imagine Dragons private concert hosted by CoStar. We also were disappointed to miss out on Lady Gaga and Bruno Mars at the JLL party (Hint: Keep reading until the bottom if you want to earn an extra month of premium membership).

Every year on the last day of the convention, we host a speaker series. It’s a great time to get together at the end of ICSC for some amazing talks and delicious In N Out Burgers. Stay tuned in the coming weeks for a detailed summary from each talk. In the meantime, have a look at our blog post from May to see our speaker roster!

Check back next week for more of our RECon RECap. We’ll be hearing from convention veterans as well as from the perspective of an ICSC rookie. Additionally, we will be reviewing some of the major headlines from ICSC and recapping our discussions about how the convention went this year.

Thanks for reading until the end. Email [email protected] with the subject line “Lady Gaga & Bruno Mars Impersonators?” and get a free month of premium membership.