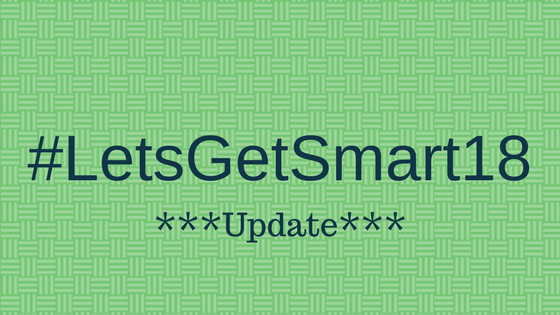 The #LetsGetSmart18 speaker series will take place on May 23rd on the final day of ICSC RECon at Booth S246 on S Street in the South Hall of the Las Vegas Convention Center.

The #LetsGetSmart18 speaker series will take place on May 23rd on the final day of ICSC RECon at Booth S246 on S Street in the South Hall of the Las Vegas Convention Center. The series was designed so that those stragglers that remain at the convention on Wednesday can get the most out of it. Last year's speakers were outgoing ICSC President Liz Holland of Abbell Associates, Doug Jerum of Ferrara Jerum, CBRE's Pamela Flora, Craig Wood and John Sherry of AMP Technologies, Michael McClure of Ad Art Sign Company and Andrew Bermudez of Digsy AI. They represented a microscosm of many of the different sectors of the shopping center industry. Take some time to watch the video from last year's #LetsGetSmart17 on our YouTube playlist. There are also great written summaries of the talks and ensuing discussion available on the QuantumListing Blog.

This year we have another spectacular line up, which we're continuing to develope. Previously we announced Julie Augustyn from Foundry Commercial, Ewa Baska from Buildout, Linda Day Harrison from the Broker List, and Jean Maday, who leads the commercial initiative from the National Association of Realtors. We're excited to announce that we've added CRETech and The News Funnel's Kateri Osborne, Andrew Bermudez from Digsy AI, and Mike McClure from Ad Art Sign to the roster. Two new speakers have also been added to the roster. Allison Maguire from Walc, and the ICSC's own Carlos Baudett. We have a stellar line up of speakers, and #LetsGetSmart18 promises to be exciting and informative.

We're also taking our video coverage of the event up a notch. Howard Kline of CRE Radio & TV has agreed to assist with the taping, so those of you unable to attend will get the next best thing to being there! Unfortunately, the tasty In N Out burgers and red wine only are included if you are there at Booth S246.

If you'd like to attend all or part of #LetsGetSmart18, kindly fill out the form below. Walk-ins are welcome, but it will help with our In N Out order if we know you'll be there!

A NOTE TO THE SPEAKERS AND HOSTS OF #LETSGETSMART18