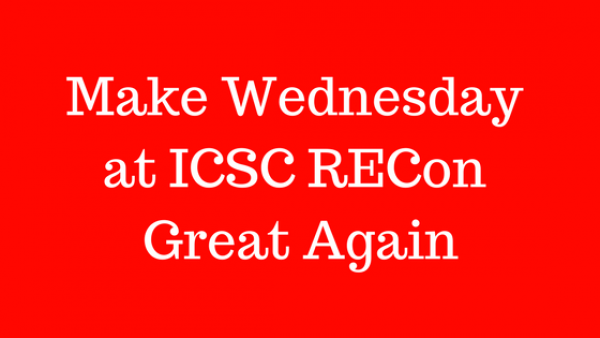 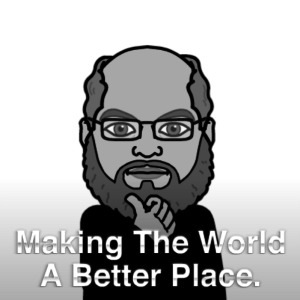 I'm a man on a mission, and that mission is to make Wednesday at ICSC RECon great again.* Companies spend big bucks at RECon to exhibit and send their personnel to attend. The marginal cost of making Wednesday a worthwhile day to attend is really negligible compared to the sunk costs of exhibiting. I am not here to bash ICSC. I really think that it is a terrific organization, with a great staff and dedicated member volunteers. My goal is to exhort the leadership and its members to rethink the last day of its biggest event of the year.
My companies, Perlmutter Properties and QuantumListing share a booth, S246 S Street in the South Hall, with Benbrooke Realty Investment Company and Gladstone Development Corp. I've always been able to get something out of Wednesday at RECon, but compared to the first two days, it just isn't the same. As a result, with the help of Brian Donovan of Donovan Real Estate Services, we are trying to organize a speaker series at our booth. Here are a couple of the emails I've been sending out to prospective speakers.

"I left you a message on Friday. Not sure if you will still be at RECon on Wednesday, but I'm organizing a speaker series in my booth and would love it if you had a half hour to participate on Wednesday morning. So far, we have Pam Flora, Director of Retail Research at CushWake and Chuck Dietz, the architect, and Mike McClure of Ad Art Signs. Hoping to get one or more of the Seritage redevelopers, and will hopefully hear on Monday from them, a supermarket guy, someone on sustainability, financing, etc.

I set up a website, www.letsgetsmart.info that will be updated with info. Ultimately, I'd like to make Wednesday RECon's equivalent of SXSW, with events happening all over the convention floor, so that RECon participants stay for Wednesday, not because they have to, but because they want to. Won't necessarily happen this year, but over time it should be achievable.
If you can't make it, let me know if there is someone else from *** (name redacted, but he is a ICSC trustee) you would recommend, as well as anyone else you think would be good."
And, to a friend who works at a supermarket company, and can't speak because he is leaving on the redeye asking for more information,
"Just started working on it last week. Hoping to hear back from a few people tomorrow. But here's what we have so far: (Check for the latest updates at www.letsgetsmart.info)

We have Pam Flora, Director of Retail Research at CushWake talking about how the retail Armageddon is exaggerated and Chuck Dietz and Mike McClure talking about trends in retail architecture and signage. Hoping to get a couple of the Seritage re-developers and someone on sustainability.  I would love to have a supermarket represented since that is an industry that is always in transition and dealing with new forms of competition.

ICSC has done such a poor job of making Wednesday compelling that I wanted to take a stab at it myself. 30 years ago when I first started attending, the third day of the show was almost as busy as the first two. I understand that the economics have changed and technology has obviated some of the need, but since exhibitors are compelled to stay until the end, I want to find a way to make the most of it."

A bunch of the folks I have contacted have told me that although they would love to, they can't speak because they are leaving on Tuesday or early Wednesday. Can you imagine making it to the finals of March Madness, but not playing because you booked a ticket home after the Semi's? This is our Big Dance. An industry with billions if not trillions in assets can't stretch its biggest event of the year into a third day? That is pathetic. Kudos to Pam Flora, Director of Retail Research at Cushman & Wakefield for agreeing to modify her travel schedule to participate.

And ICSC, you don't schedule a single speaker or discussion panel for Wednesday, but you require your exhibitors' booths to be manned until the end? It seems to me like there is a bit of a disconnect. And on Monday and Tuesday, why don't you let people with Exhibitors badges into the luncheons and sessions? Exhibitors pay big bucks to be there, and those badges often go to key personnel, not just "spokesmodels." Wednesday, why don't you let the Marketplace exhibitors into the Leasing Mall? The ICSC works for its membership, and those members should insist that our trade organization makes changes that benefit the exhibitors that drive attendance to events like RECon.

I've pasted the list of all of the ICSC Trustees from the ICSC website below. There are more than 80 of them and I'll be asking each one of them if they would like to participate in our Lets Get Smart speaker series. I'm hoping that at least one of them will still be there on Wednesday and agree to speak. I know some of them, and Robert Perlmutter might be a long lost relative, maybe he'll step up to the plate! If you are reading this and are on the list below and want to speak, send an email to [email protected]

*For the record, I voted for Hillary. 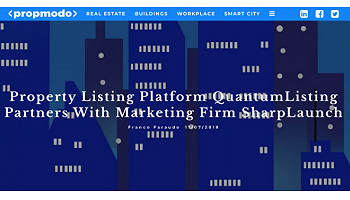