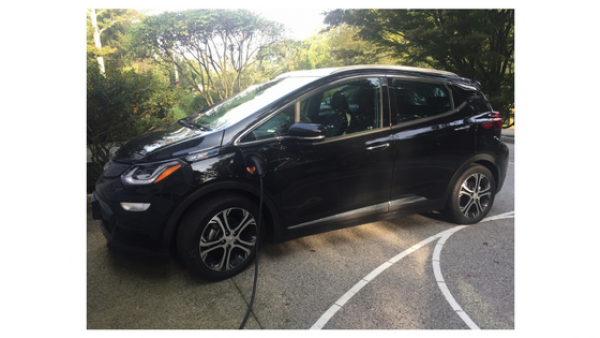 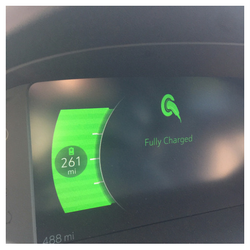 I'm charged up. Got a Bolt. No, I'm not saying I am going somewhere. That would have been "Gotta bolt" or "Got to bolt." Do people even say that anymore? No, what I mean is that I just got a Chevrolet Bolt EV a week ago. I'd been driving a Toyota Prius for ten years, and it is a terrific car. It has 190,000 miles on it and has no signs of dropping dead anytime soon. We swapped out our Suburban which was coming to the end of its lease because we only have one child left at home, as opposed to the four we had when we got it. We don't need something that big anymore.
So far, I am really enjoying the Bolt. It handles great, has fantastic acceleration, it's comfortable, and has tons of cool features that weren't available in my Prius. I will admit that for years I've had low-grade Tesla envy. There were two things that kept me from getting one, though. The first was the cost, and the second was "range anxiety," the concern that I would not have enough juice in the battery to make it back home. The Bolt solved both of those concerns for me. Its cost is about two thirds to half of a comparably equipped Tesla Model S and it has a range of 238 miles on a full charge, although as you can see in the picture to the left, it shows a 261 mile potential range. I did need to install a Level 2 charger at home which provides twenty five miles of range an hour, though, otherwise you only get about four or five miles of range per hour of charging on a regular outlet.
This post, however is not a car review. It is real estate related. Driving an EV has newly sensitized me to the general lack of public charging facilities in the New York suburbs. In my town, there are three, all located at the train station. Some of the adjoining towns have none, and these are pretty affluent communities.
On the same day I picked up my Bolt, I got an email from my gym with a survey in it. I've been going to this gym for 17 years, it's a nice place, and there is a great sense of community among its members. The last question on the survey gave you an opportunity to say what you would like to see added to the gym. My suggestion was EV charging stations. The assistant manager just wrote back the following: "Thanks for your continued feedback and loyalty to the club.  I don't think we have had anyone ask about the charging stations, its something to consider down the road.  Please let us know how else we can help you be successful with your exercise program."
And here's my response back to him:
"Thanks for getting back to me. You might want to think about it sooner than later. Here are a few reasons why:

1) EVs are here to stay now. More people will be buying them and leasing them as new less expensive models come to market.

2) You’ve got a new competitor in Lifetime Fitness coming to Chappaqua, and even if they don’t have them, the neighboring Whole Foods will! Saw Mill Club does not offer EV charging.

4) You don’t have to provide the electricity for free. Most charging stations require payment, done through a mobile system. Check out ChargePoint or EVGo.

5) Club Fit could be the first public EV charging stations in all of Briarcliff. Ossining only has two located on 9A behind the Village building and Chappaqua only has 3 at the train station.

I also had the opportunity to talk with one of my town council members over the weekend. As mentioned above, we have three public chargers at the train station, and during the week, you need a town parking permit to use them. I suggested to the councilwoman that the Town Board look into providing EV charging in all of the public parking lots, and use its influence to have chargers installed in the town's shopping centers and gas stations. As EVs and plug-in hybrids continue to gain traction, their accessibility will be another metric by which homebuyers judge a community before purchasing. She replied that she thought it was a good idea. The board and planning department would look into it, and also see if any public grants were available.
These reasons mentioned above are something every owner of commercial real estate, multifamily real estate and every municipality should take into consideration when deciding whether they should add EV charging stations. And, it's not just EVs they need to accommodate, but also plug-in hybrids, which almost every major car company now offers. Office, retail and multi-family real estate are going through periods of major disruption. Corporate downsizing, telecommuting or co-working have all had an impact on office vacancy rates in most markets. If the CEO is driving an EV and your building doesn't have a charging station, chances are she's going to pick a different property. Online retail and accelerating home delivery times are creating havoc in occupancy at malls and community shopping centers. When someone's charging their car at your shopping center, they are probably going to be spending an hour there. Don't you think your tenants want customers to have another reason to shop and hang around your shopping center? When millennials who own or want to own an EV or plug-in hybrid drive up to apartment building and it doesn't have a charging station, they'll pick one that does. Potential tenants or customers often have choices among comparable properties, and having charging stations at your apartment building, office building or shopping center may give you the edge you need.
Because of its tougher emissions laws, California is way ahead of most of the country in providing a robust charging infrastructure. A look at ChargePoint's maps of Los Angeles or Silicon Valley show hundreds of public stations in dozens of locations. No doubt that is where the rest of the country will ultimately get. But if I were an owner of an office building or shopping center anywhere in the country, I would not hesitate a minute to add charging stations. It's a relatively inexpensive amenity to add, and you can actually get paid for it.
Sure, it's a lot sexier to talk about self-driving cars and their impact on real estate, but EVs and plug-in hybrids are already here and more are going to be hitting the street really, really soon. Why wait to install EV chargers? Tesla has hundreds of thousands of orders for its Model 3, Chevrolet can make 50,000 Bolts a year, Nissan's new Leaf will get 150 miles on a charge, Volvo will soon only be selling electric only or hybrid cars. EVs are not going away. Become an advocate in your community for EV charging stations before you run out of juice!