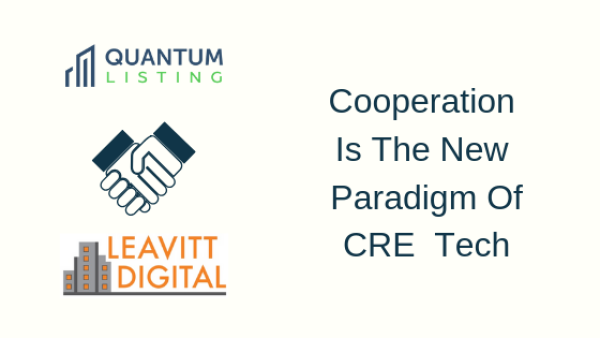 Cooperation is the New Paradigm of CRE Tech

Last week, QuantumListing CEO David Perlmutter hosted a webinar with Leavitt Digital (LDCRE) CEO Brendan Hotchkiss. During their conversation, they discussed the the growing importance of cooperation for CRE tech companies like QuantumLsiting and LDCRE and some of the most important trends in CRE tech.

LDCRE is a CRE Tech company that serves brokers’ listings to local news organizations, and they do it for free. Once you upload your listings, which you can do using QuantumListing, they’re automatically sent to local news sites in your area. LDCRE currently partners with over 500 news sites and is expanding that number to 2,000 in 2019!

Even if you didn’t make it to the webinar, you can read about it here and watch it below. You can also sign up for all future QuantumListing webinars HERE, and we’ll email you about all future webinars.

The biggest changes in CRE tech

David and Brendan began the webinar discussing the biggest changes in CRE tech over the past 20+ in the industry. Back in the late ‘90s, email was still more of a novelty than a necessity. And, instead of uploading listings to sites like QuantumListing and LDCRE, Brendan said, “we’d spend a fortune going to the printer and printing out packages, postcards, and even faxing things.”

Things were much more disconnected back then. As a result, there was a lot less cooperation among brokers, Brendan noted. Simply put, it was a lot harder to collaborate with another broker “if your only opportunity to catch people was either on their home phone or their work phone.”

These days things are different of course. With the omnipresence of digital communication and people sharing everything on social media, we are much more connected and open to sharing. Social media in particular, Brendan said, “inspired a lot of openness in how we live our personal lives, and also professionally.”  More brokers are more open to cooperation with brokers outside their office.

This collaborative spirit has carried over to CRE tech. Following on their broker clients, and often because of CRE tech executives’ own brokerage-background, CRE tech companies are forming strategic partnerships. The syndication partnership between QuantumListing and LDCRE is but one example. QuantumListing also has syndication partnerships with SharpLaunch and Buildout, while LDCRE has quite a few of its own as well.

Collaboration and integration driving the future

David and Brendan also discussed how cross-platform collaboration and integration are driving the future of CRE tech.

Brendan discussed how LDCRE began it’s integration partnerships with Buildout, the CRE marketing platform. Brokers and marketers can send their listings from Buildout right to LDCRE with just a click. Since the initial success of that partnership, LDCRE has established similar syndication relationships with QuantumListing and Apto. Since beginning integration, approximately 99% of listings on LDCRE come from these integration relationships and the total number of listings has exploded.

“[Integration] is a win-win for all parties when there’s collaboration between CRE tech firms,” Brendan said. Every business can focus on giving their users the best possible experience in their specialty and let the integration partners handle their respective specialties.

For instance, LDCRE used to have the option for its users to upload their listings in bulk from Excel and CSV files. But this often led to errors and out-of-date listings. Now instead, users can just port over their listings from platforms like QuantumListing and Buildout. This not only gives the users a better experience, but lets the LDCRE team focus on other aspects of the platform where they can add the most value, like expanding the number of local news organizations that they serve listings to.

Integration is driving the future of CRE tech, and QuantumListing and LDCRE are at the vanguard of this movement.